The Consortium for Organ Preservation in Europe (COPE) was funded through the EU's 7th Framework Programme on research, technological development and demonstration and is the official organ preservation task force of the European Society for Organ Transplantation (ESOT). The Consortium brings together academic institutions, clinical and scientific experts and small and medium sized enterprises from across Europe to work together on advancing organ preservation techniques.

Central to the COPE project were three large, multicentre, clinical trials investigating novel preservation devices for kidney and liver transplantation. The Centre for Evidence in Transplantation, as a partner in COPE, has been involved in the design and running of these trials through the WP8 methdology work package.

The three trials are described in more detail below. 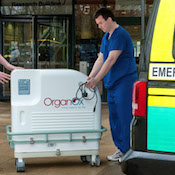 This was a randomised controlled trial comparing the current standard method for preserving a liver (in an ice box; SCS) with a new technique called normothermic machine perfusion (NMP). This technology has been developed by Prof Peter Friend and Prof Constantin Coussios at Oxford University and the device is produced by OrganOx Ltd. The technique involves perfusing a liver with oxygenated blood, nutrients and medications at normal body temperature to preserve the organ in a functioning, physiological state.

A total of 220 livers were randomised to SCS or NMP in seven transplant centres in the UK, Spain, Germany and Belgium. If randomised to SCS the liver was be stored in an ice box and the retrieval and transplant proceeded in the conventional manner. If the organ was randomised to NMP then it was placed on the OrganOx machine from the time of retrieval, throughout its storage and transport, until it was eventually transplanted.

The primary outcome measure for the trial was the peak transaminase level (AST) within seven days post-transplant. Many secondary outcomes were being recorded including graft survival and function, MRCP evidence of iscaemic cholangiopathy and a health economic analysis.

Recruitment completed in early 2016. The study demonstrated a significant inprovement in peak AST in NMP livers, with a reduction in early allograft dysfunction. There was also an unexpected reduction in the discard rate for organs undergoing NMP.

The full manuscript for the study was published in Nature, link below. 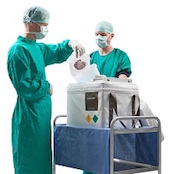 The objective of this randomised controlled trial was to evaluate pre-implantation reconditioning of donor kidneys from extended criteria donors (ECD) using oxygenated machine perfusion following cold storage. This study was led by Professor Andreas Paul from the University Clinic Essen in Germany and includes transplant centres in Germany, the UK, Belgium and The Netherlands. The trial device was provided by Organ Assist Products B.V. and the Centre for Evidence in Transplantation has supported trial design and protocol development.

Once ECD donors were identified and randomisation was undertaken, both donor organs were placed in cold storage. However one was then placed in the trial device - Kidney Assist - and received hypothermic oxygenated machine perfusion for a minimum of two hours prior to transplantation. The primary outcome measure in this project was death censored graft survival at one year, with secondary measures of delayed graft function in the first post operative week, graft function: primary non function periodically, and graft and patient survival at three months and one year.

The study is now complete, and demonstrated that oxygenated end-hypothermic machine perfusion did not result in any improvement in graft survival or function. These findings cast doubt on the way many centres use HMP for end-hypmthermic preservation.

The full manuscript has been published in JAMA Surgery, link below. 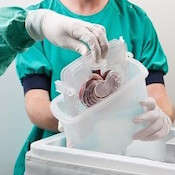 This randomised controlled trial was designed to question whether oxygenated machine perfusion is superior to non-oxygenated machine perfusion in increasing the longevity and quality of older cardiac death donors (DCD) kidneys for transplant. The trial was led by Professor Jacques Pirenne and his team at the University Hospitals Leuven (BE) and includes transplant centres in The Netherlands and the UK. The trial device was provided by Organ Assist Products B.V. and support has been given by the Centre for Evidence in Transplantation in designing the study and writing the trial protocol.

The protocol saw kidneys at donor centres immediately after procurement being randomised to hypothermic machine perfusion, one with oxygen, and one without. The organs were then transplanted into a recipient adult in end-stage renal failure on the active waiting list for a kidney only transplant. The primary outcome measure for this trial was long-term graft survival and secondary measures include primary non function, serum creanine at one, three and 12 months, functional DGF, graft and patient survival.

The study is now complete, and demonstrated that oxygenated hypothermic machine preservation is safe and feasible, and resulted in a reduction in post-transplant complications with fewer acute rejection episodes and improved graft survival.

The full results of the study have been published in the Lancet, link below.